If you have any enquires , do feel free to contact us . Thanks !

Get A Quote
Beware of Soild Particles Inhalation into Blower

The side channel blower can produce both vacuum and blast air. The impeller transfers the energy directly from the motor to activates the fan. Once in operation, the blower transports air or gas through a close narrow fitting pump house by rotating the fan blades at high speed. This fine example of blower technology can ventilate or aspirate the air granting a safer working environment. The various application of side channel blowers can be seen in the aeration of fluids, vacuum lifting, dry blowing, sealing air, blowing external agents, aeration of biological processes, and point suction.

In this brief article, we would like to talk about some of the problems caused by extraneous agents’ inhalation into side channel blowers. 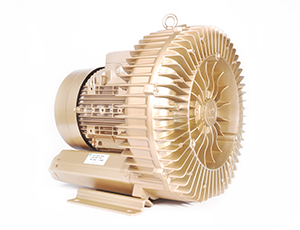 We often hear the question regarding soild particles or large particles inadvertently inhaled in the blower. External soild particles can cause severe damage to the motor and the overall equipment. For ordinary side channel blowers, this phenomenon may occur on a regular basis.

This inconvenience manifests itself, especially during suction operation. When the suction function is exerted, the frequency of occurrence is higher. Generally, most of side channel blowers on the market claim that their products have good sealing performance. However, when they are used in real operation, they incur in the same problem.

Typically, when soild particles are sucked into the side channel blower, the impeller may be slightly worn to the front cover of the pump body. This kind of detriment may cause the shaft to wear out and produce very unpleasant loud noises. Besides, it may also cause the winding drum to be penetrated and the motor to be directly burned out.

For instance, when side channel blowers are applied to industrial vacuuming, factories often have waste residues on their machinery, which needs to be collected. At this time, external agents such as waste debris may also be drawn in due to a leak in the filter screen of the side channel blower. Extraneous material entering the air drum can result in different sorts of malfunctions. If foreign matter enters the air drum, it will cause the fan blade to touch the pump body and the front cover. At this point, bearing wear and jamming problems are most likely to affect the normal use of the high-pressure fan.

In other cases, it is even possible for the winding drum to be directly penetrated, resulting in air and pressure leakage. Due to this reason, side channel blower efficiency will be significantly reduced. In addition, when a large amount of foreign matter enters the equipment, the internal fan can become obstructed. In this circumstance, the operating load will increase, causing the internal temperature to rise burning the motor. If some of these situations occur, the side channel air blower will be unable to be repaired.